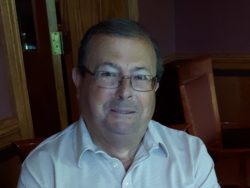 Steve fought the debilitating disease of Leukemia with great courage and conviction; always putting his best foot forward. His love for life was infectious and set the standard for his family to follow. He was a dedicated and loving husband, a thoughtful father who made sure his kids had everything he never did. Becoming a Pappou and then Propappous was the highlight of his life. He was very proud of his accomplishments which included volunteering with the Boy Scouts of Canada and later with the Civitan Club and their work to help those with special needs and other humanitarian causes. He enjoyed his career which took him to many different locations; from Ontario to Pennsylvania to Virginia and back home to Ontario. During his time in Drayton he had such passion for greeting new people, whether at the local grocery store or Drayton Theater. He enjoyed roughing it in his air conditioned, 42-foot trailer, lol, where he made numerous life long friends.

As per Steve’s request, cremation has taken place. He will be home again soon.

Heartfelt thanks to all of the Doctors, special mention to Dr. Reed, Dr. MacEachern, Dr. Peterkin and to all of the Nurses who touched his life, we thank you.