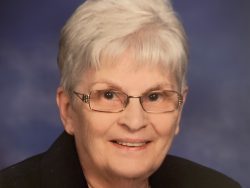 of London and formerly of Moorefield, passed away suddenly in the comfort of her home on Thursday January 20, 2022 in her 87th year. Beloved wife of the late Allan Schieck (1986). Loved mother of Jeffrey Schieck of Guelph, Kathy Schieck of Palmerston, Linda Johnson of London and Stephen and Heather Schieck of Moorefield. Loving grandmother of Emily Schieck and Matthew Schieck and his fiancé Natasha; Robert Johnson; Joshua Christie and Caleb Schieck. She will also be dearly missed by Julie Johnson. Fondly remembered by her brother-in-law Grant Schieck and the late Edith and sister-in-law Lela Carley and the late Elgin as well as her nieces, nephews, friends and neighbours.

Predeceased by her parents Robert and Olive (Cole) Fisher, Sisters and brothers in law Aileen and George Lamont and Margaret and Ken Nisbet.

“Shirley was raised in Stratford and excelled in her academic studies. Having skipped a grade or two, Shirley was notably the youngest student in her nursing program at St. Mary’s Hospital in Kitchener. It was during this time that she went on a blind date at the prompting of one of her class mates. She and   Allan hit it off and married in June of 1956. Though she married a “farmer at heart”, they both worked in the city until 1961 when they bought a farm in Maryborough Township, which they farmed until Allan’s death from cancer in 1986. Shirley put her nurses’ training to good use. She juggled life as a mother of four, and worked full time as a nurse at the Palmerston District Hospital until she took early retirement. She was head nurse for several years before retiring. Shirley stayed on the farm for a couple more years before selling it to their youngest son, Stephen. It was at this point in time that Shirley moved to London to the home she has enjoyed for many years now. Although she may not have looked like a gambler, she loved to play euchre, bridge, bingo and was always up for a visit to the casino when asked. Later in life Shirley enjoyed reading novels, doing word searches and solving crossword puzzles. Shirley overcame many challenges with an inner strength that we would all be blessed to possess.”

As expressions of sympathy, donations to Palmerston and District Hospital would be appreciated by the family and may be made through Heritage Funeral Home, Drayton Chapel 519-638-3072