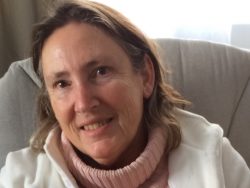 of Palmerston, Ontario, Canada, was called quickly and peacefully into the loving arms of Jesus her Savior at St. Joseph’s Health Centre Guelph on Wednesday, March 9, 2022. She was 65. Fran had advanced breast cancer for a short period. Loving mother of Ian Wassink and Christine Nesseth of Portage la Prairie, Manitoba; Julie Wassink and Justin Jacobs of London, Ontario; and Zachary and Nicolette Wassink of Baynes Lake, British Columbia.

Fran was born on December 14, 1956 in Alliston, Ontario. She grew up rurally around Beeton, Listowel, Orangeville, The Netherlands, Palmerston, and then Moorefield as her Dutch parents moved frequently for farming and renovating property. At six years old, she received her first communion at St. Francis Xavier Roman Catholic Church in Tottenham. She would later renounce Roman Catholicism for a Protestant personal relationship with Jesus. Fran attended numerous elementary and secondary schools such as St. James School in Colgan, and graduated Grade 8 from Elma Township Public School in Atwood in 1970 and received 92 per cent in spelling. She attended Orangeville District Secondary School with 90 per cent in typewriting and 88 per cent in math. Grade 10 brought Fran to Banting Memorial High School, Alliston, where she earned the highest grade of 95 per cent in French and seventh out of 220 students in math. Fran graduated from Norwell District Secondary School, Palmerston, in 1974, once again with high academic achievement: 90 per cent in accounting, 88 per cent in math, and 82 per cent in English. She also received achievement in two 4-H Homemaking Club Units sponsored by Ontario Department of Agriculture and Food. Despite moving around frequently, Fran’s resiliency gave her strength later in life.

Fran’s academic achievement earned her immediate full-time employment with The Royal Bank of Canada in 1974 as a teller and various promotions in Harriston, then Elmira, and finally Brussels. She stopped working after 14 years when her second child Julie was born in 1988 and prided herself as a stay-at-home mom ever since. She married her high school sweetheart in 1979, and they resided at RR1 Wroxeter until divorce in 2005/2006. The couple and family enjoyed many vacations to western Canada, eastern Canada, California, Florida, French River, and The Netherlands. Fran moved back to Palmerston in 2006 where she happily resided prior to illness. She worked and volunteered providing child care for health care workers, Palmerston and District General Hospital Gift Shop and Hospital Elder Life Program (HELP), Camp Shalom, Listowel and District Right to Life, Light the Darkness Ministries, Christian Heritage Party, and held many roles in the churches she attended. Fran worshipped at Harriston Reformed Church until it closed, then Palmerston Christian Reformed Church. She further explored other denominations on her spiritual journey and was baptized at Hazelglen Alliance Church, Kitchener, in 2016. She finally settled to worship at Listowel Baptist Church. Her strong faith in Jesus gave her great comfort throughout her life and especially in her final days and weeks. She diligently studied the Bible, prayed, and was proud to spread God’s Word.

Fran dabbled in ceramics, CB radio, curling, camping, and ice skating in her early adult years. Gardening was a joy. She took up scrapbooking, crafting, and knitting in her later years as ways to commemorate her children’s weddings and grandchildren. Fran fostered appreciation of her Dutch culture with her family, and without pause would indulge in stroopwaffles, banketstaaf, croquettes, and many treats.

Her pride and joy were Ainsley, Ashton, and Denver who had quality visits before she passed away. She was happy to see them grow and explore the world, play with toys, draw and colour, and run outside. She gladly spoiled them with candies, toys, and food.

Fran’s family wishes to thank the compassionate staff at Palmerston and District Hospital, and St. Joseph’s Health Centre Guelph, including all staff who assisted her on her journey. After her pain was under control, Fran was truly comfortable and enjoyed her final days and weeks despite this terrible diagnosis. She found joy in photographs, memories, and the wide variety of delicious food, treats, and drinks that made her smile and happy. With great appreciation: thank you.

In accordance with Fran’s wishes, only funeral service will be held at 11:00 a.m. on Saturday, March 19, 2022 at Listowel Baptist Church, 6161 County Road 86. Private interment ceremony for family will follow at Palmerston Cemetery.  As expressions of sympathy, donations to a charity of your choice in lieu of flowers are greatly appreciated.