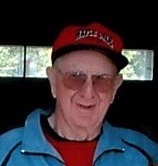 of Moorefield passed away  peacefully  at the Strathcona Long Term Care, Mount Forest, on Sunday, August 21, 2022 in his 96th year. Beloved husband of the late Shirley Beatrice Jackson  (nee Henry) (2021) for 59 years.  Son of the late Arthur and Pearl Jackson. Brother-in-law of  Keith Henry and his wife Joyce and Edith Henry. Predeceased by his siblings Mary and her husband Sid Hollowood,  Stella and her husband Jack Chapman,  Alice and her husband Clarence Hill, Harold Jackson, Jean Jackson, Alexander Jackson, Jim Jackson Lucy Clarke, Kenneth Jackson and his wife Glenys and Russell and Reta Pearson and brothers-in-law and sisters-in-law  Joyce and her husband Elmer Yost, Gerald Henry and Harold Henry and his wife Alice.  Allan will be fondly remembered by his nieces, nephews, neighbours and friends.

A funeral service of remembrance will be held in the Funeral Home Chapel at 10:30 a.m.

The service will be video taped and will uploaded to the funeral home website.

As expressions of sympathy donations to the  Palmerston Hospital Foundation or the charity of your choice  would be appreciated by the family.