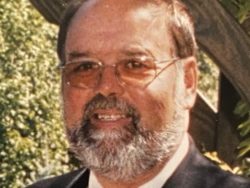 of R.R. # 3 Palmerston passed away peacefully at his residence on Thursday, January 26, 2023 in his 77th year. Beloved husband of the late Terry Bramhill (2015). Dear father of Jennifer and her husband Corrie van Tol of Farewell, Josie and her husband Jeff Garner and Jessie Bramhill and her friend Adam Newton all of Guelph. Cherished grandfather of Shelby and Allie van Tol. Brother of the late Marilyn and Bryon Fritz and Judith Bramhill of Toronto. Son of the late Ivan and Thelma Bramhill. Son-in-law of Gloria Fallis of Mt. Forest and the late Joseph Walker. Brother-in-law of Joanne Huston and Paul Campbell Dave Walker, Lannie and Heather Walker and Tracy Gatis and Sandy Cameron. Fondly remembered by Brent Caughill, Jim Carnahan, Cathy Gottschalk,  many nieces, nephews and friends.

A Celebration of Doug’s life will take place at a later date and will be announced at that time.

As expressions of sympathy donations to The Palmerston Hospital Foundation or the Palmerton Railway Museum would be appreciated by the family.