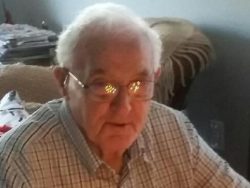 of Palmerston and formerly of Meaford passed away suddenly at the Palmerston and District Hospital on Tuesday, November 28, 2017 in his 88th year.  Beloved husband of Clara (Van Herwynen)  for 64 years.  Dear father of Mary and Henry Post of Palmerston, Jack and Barb Van Beurden of Brampton, John Van Beurden and his fiancé  Cary Ledingham of Markdale and Arlene and Gary Rudolph of Brampton. Cherished grandfather of Peter and Michelle Post, Michael and Lisa Post, Robin Bachelor, Bryan Post; Karen and Colin Dobson, Mark Van Beurden and his fiancé Vanessa Hymans and Amanda Van Beurden; Alyssa and Shawn Dixon,  Sean and Becca Van Beurden; Weston Rudolph and Colton Rudolph. Great grandfather of Elsie, Abigail, Clara, Mila, Braedon, Charley and Brock. Brother of Riekie and Jo Thyssen and Cor and Miet Van Beurden all of the Netherlands. Predeceased by his brother Martin and Riet Van Beurden. Arnold was a retired employee from the Ford Motor Company.

To honour Arnold’s wishes cremation has taken place and there will be no period of visitation or funeral service. A private family celebration will take place at a later date.

In lieu of flowers and as expressions of sympathy donations to the Heart and Stroke Foundation would be appreciated by the family.