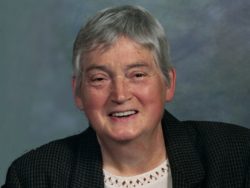 of Drayton peacefully went home to be with her Lord at the Palmerston and District Hospital on Thursday, March 28, 2019 in her 85th year. Beloved wife of the late Willem (Bill) Radstake (2015) for 56 years. Loving mother of Brenda and John Hofstee of Toronto, Jane and Ed Finlan of Port Stanley and Darryl and Pamela Radstake of Toronto. Dear Oma of Matthew Hofstee and Ryan Hofstee both of Toronto; Aaron Paterak and Carly Paterak both of London. Sister of  Mina Buevink of the Netherlands. Sister-in-law of John and Sandy Radstake of Mount Forest, Mina Zantinge of Arthur, Riek Foster of Drayton, Hank and Joanne Radstake of R.R. 2 Alma and Eileen and Monty Woodyard of Elora Predeceased by her parents Bernard and Bernendina (Mellendijk) Buevink and sister Haneke Buevink.