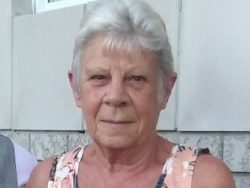 As expressions of sympathy donations to the Canadian Cancer Society or the Heart and Stroke Foundation would be appreciated by the family.