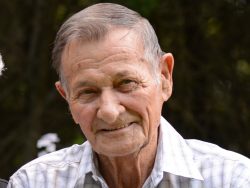 As expressions of sympathy donations to the Palmerston Hospital Foundation or the Terry Fox Foundation (Drayton Run) would be appreciated by the family.