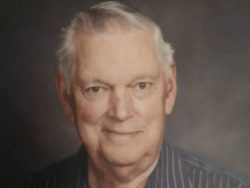 Loving husband, father, grandfather, brother, uncle, and friend passed away peacefully on Monday October 28, 2019 at Groves Memorial Hospital from the complications of a life well lived and a body getting old. Beloved husband of Joanne Kidnie. Dear father of David and his wife Tammy, Paul and his wife Bonnie, Brenda and her husband Bob, Dana and her husband Rick and Derek and his wife Debra. Proud grandfather of Kyle Kidnie, Kendra Kidnie, Bryan Kidnie (Amanda), Blaine Kidnie (Michelle MacKenzie), Kierra Kidnie (Dan Bossenberry), Dustin Janssen, Jason Janssen (Kristina Krmelj), Jesse Janssen (Lena), Tori Jamieson, Tara Jamieson, David Jamieson, Dana Alexandra Jamieson, Owen Kidnie and Delanie Kidnie.  Great grandfather of Emelia and Cole Kidnie. Norm is survived by his sister-in-laws Donna Kidnie, Marjory Cunningham, Donna (Neil) Darby, and by his brother-in-laws Ron Schieck, Floyd Schieck (Donna). Norm is predeceased by his four brothers Wilfred (1920 -1994), Hugh (1922-2019), Jack (1925 – 2006) and Kenneth Kidnie (1926 -1994).  Norm is predeceased by sisters- in law Lorene McDonald, Marjorie Schieck, Marjory Kidnie and Bertha Kidnie and brother-in-laws Joseph McDonald and Frank Cunningham.  He is also survived by many nieces and nephews and their families. Norm was the son of the late George S. Kidnie (1953) and Ruthena May Reid (‎1984). He was born on March 27,1932. Norm grew up on the Kidnie family farm, which was located on Highway 9 west of Arthur. On April 5th, 1958 Norm married Joanne Schieck and shortly thereafter purchased a farm near his brothers on Highway 9. The farm would be their home for the next 60 years. Norm was a long time employee of the County of Wellington and proud member of the Tin Shack Camps where many good times were had.

Friends and relatives are invited to share their memories of Norm during the visitation on Wednesday, October 30, 2019 from 7 to 9 p.m. at Crawford Funeral Chapel, 243 George Street, Arthur.  The Funeral service will be held in the Arthur United Church, 101 Tucker Street, Arthur on Friday, November 1st, 2019 at 11 a.m.  Interment will take place in Greenfield Cemetery, Arthur.

If desired and in lieu of flowers, donations in Norm’s memory may be made to ‎Arthur United Church, the Heart and Stroke Foundation of Ontario or Groves Memorial Hospital which may be arranged through the Crawford Funeral Chapel.