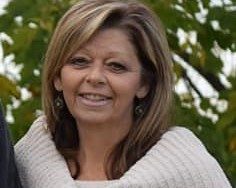 of R.R. # 1 Alma passed away unexpectedly after a short battle with cancer at the Groves Memorial Hospital, Fergus on Wednesday, January 29, 2020 at the age of 55.  Beloved wife and best friend of Ron Bults for 29 years.  Cherished mother of Amanda and her fiancé John Amy of Teviotdale, Branden Bults and Katie Bott of Alma, Dylan Bults and his fiancé Marcie Landman of Moorefield, Dustin Bults and Elise Roth of Moorefield, Becky Bults of Alma and Tamika Kirk of Arthur.  Dearest Nana of Bentley, Jaxson, Emma-Lee, Emmit, Jolene and Maddaline. Daughter of Edith Beer of Arthur and the late Earle Beer (2010).  Sister and sister-in-law of Dale and Janet Beer of Waterloo, Lisa Beer of Mount Forest, the late Jody Beer (1972), Hank and Linda Bults of Drayton, Grace and Tony Roelofsen of R.R. # 1 Alma, John and Betty Bults of Maidstone and Harvey and Heather Bults of R.R. # 3 Moorefield.  Fondly remembered by her many aunts, uncles, nieces, nephews, cousins and friends.  Predeceased by her father and mother-in-law Hank and Jean Bults.

Please join the family for a casual afternoon in Celebration of Chris’s life at the Moorefield Community Centre on Saturday, February 8, 2020 from 3:00 to 7:00 p.m. with remembrances at 5:00 p.m.