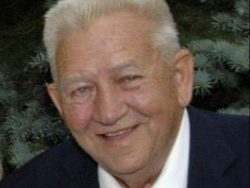 of Drayton and formerly of Elmira passed away peacefully  at the Caressant Care Nursing Home, Harriston on Sunday, February 9, 2020 in his 87th year.  Beloved husband of Eva (Wortman) Ropp for 55 years. Dear father of Ray and Rhonda Ropp of Elmira,  Lori and Karl Martin of Elmira and Kevin and Leah Ropp of Elmira. Cherished grandfather of Ashton (Matt), Austin (Kaitlyn);  Dan, Rob (Corinne), Staci (Marlin); Taylor, Kyle. Great grandfather of Ben, Samantha, Kinley and Hailey. Brother of Joan Schoonderwoerd of Clinton. Fondly remembered by his nieces, nephews and friends.  Predeceased by his parents Aaron and Clara Ropp, sister Jean and her husband Bill Esch  and brother-in-law Bill Schoonderwoerd.  Joe worked at Schneiders and Norstern Meat Packers and was the owner of the Central Tavern in Elmira for 13 years. To honour Joe’s wishes cremation has taken place followed by a private family service. The family would like to thank the staff at  the Caressant Care Nursing Home, Harriston  for the care and compassion that they showed Joe.

As expressions of sympathy donations to the Palmerston Hospital Foundation would be appreciated by the family.