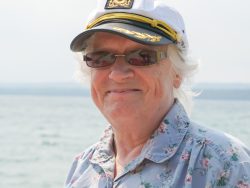 In keeping with Shirley’s wishes, cremation has taken place and there will be no visitation.  Private family spring interment in Palmerston Cemetery.