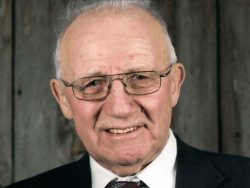 Arend will be laid to rest in the Drayton Cemetery following the service.

As expressions of sympathy donations to the Palmerston Hospital Foundation would be appreciated by the family.

In 1960 he met Audrey Praamsma of Hamilton. On September 1, 1961 they married and together they worked hard to build the farm and raise a family of four children.

Although he farmed with his father, every decision made was first discussed with his lifelong partner, Audrey. She was the love of his life for 59 years. The farm grew and soon they were milking over 100 cows. Over the years, as the quota system was introduced, they again grew the herd. In the 1980s they expanded into the export business and sent three pot loads of Holstein cattle a month as far as North Carolina, New York, Michigan, and Mexico.

Arend attended the stockyard sales every Thursday for 70 years and made many friends in the cattle business in that time. He was known for his honest deals made on a handshake or his word. Every Thursday, Arend would be found wearing his orange hat in the seats of the dairy ring. Over the last few years when his hearing became poor, his friend Mr. John VanStraaten did his bidding and for that we thank him- it allowed Arend to continue.

Arend and Audrey passed the main milking herd onto their daughter Maria and her husband Henk in 2006 who then changed the name to Henria Holsteins. Arend had a dream of farming in the north, so the couple went up to New Liskeard where they purchased a dairy. Their son Brent came home to help farm there and now runs Flinkert Farms with his wife, Wilma.

Arend and Audrey came back to the home farm in Drayton where he continued to buy and sell cattle as well as feed heifers for their northern farm. He had as many as 250 head to care for up until March 2020. Hard work was his way of life and he instilled this value into his children and grandchildren.

Colossians 3:23-24 “Whatever you do, work at it with all your heart, as working for the Lord, not for human masters, since you know that you will receive an inheritance from the Lord as your reward. It is the Lord Christ you are serving.”