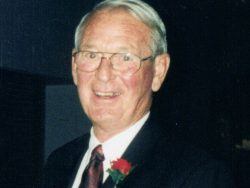 passed away peacefully at Palmerston Hospital on Sunday, September 6th at 89 years of age.

Paddy and Dorothy have had a long and loving marriage, true partners in everyday life and in all endeavors.  For over 40 years Paddy and Dorothy owned and operated The Rundle Feed Mill in Palmerston.  Everything they did, they did together!  They shared a love of the many horses they had over the years and both were avid equestrians.  Later they transformed the site of their island cottage at Red Bay truly into ‘Another World’, building a family gathering place from the ground up.  One of their other great pleasures as a couple was their yearly trip to the Barbados.  After going there for almost 30 years they became practically honorary citizens.  Paddy will be missed by friends they made there from around the world.

Paddy joined the Palmerston Lion’s Club in 1956 and was an active member up until his death.  In the Lion’s Club he held the positions of Secretary, President, Deputy District Governor, Zone Chair, District Governor, and was honoured by his fellow Lions with the Melvin Jones Fellowship Award for dedicated humanitarian services.

A dedicated supporter of his community, in addition to his work with the Lions Club, Paddy sat on the Hospital Board for 4 years, was a member of the Town Council for 6 years, was the Secretary of the Palmerston Board of Trade and served as the President of the Ontario Grain and Feed Dealers Association.  Paddy held the position of the President of the Agricultural Society and Dorothy and Paddy organized and ran the Fall Fair Horse show for many years.

Paddy was respected and admired by all who have been lucky enough to know him as a friend or through his many business ventures.  For such a quiet and unassuming man Paddy accomplished so much and was loved by all. He will be missed by his family and many, many friends. Dorothy and her family would like to thank Dr. Phil Deacon and the staff of The Palmerston Hospital for the care a compassion shown to Paddy and to them during this difficult time.

To honour Paddy’s wishes cremation has taken place.  There will a celebration of Paddy’s life and achievements at a later date and will be announced at that time.

As expressions of sympathy, donations to The Palmerston Lions Club, St. Paul’s Anglican Church, the Palmerston Hospital Foundation or the charity of your choice would be appreciated by the family.