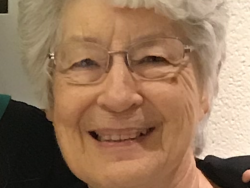 Joanne is survived by her sisters Marjory Cunningham, Donna (Neil) Darby, her brothers Ron Schieck, Floyd Schieck (Donna) and her sister-in-law Donna Kidnie.  Joanne is predeceased by her sister Lorene McDonald and her husband Joseph, her sister-in-law Marjorie Schieck, her brothers-in-laws Frank Cunningham, Jack and Wilfred, brother and sisters-in-law Hugh and Marjory Kidnie, and Kenneth and Bertha Kidnie.   She is also survived by many nieces and nephews and their families.

Joanne was the daughter of the late Leonard Schieck (1992) and Florence Wright (‎2000).  She was born on March 21, 1935 in St. Catherines.  Joanne grew up on the Schieck family farm in Drayton. Joanne was a teacher and did her initial training in one room school houses.  She stayed home to raise the kids and eventually returned to work at Alma public school. On April 5th, 1958 Joanne married Norman Kidnie and shortly thereafter purchased a farm near Norm’s brothers on Highway 9 in Arthur. The farm would be their home for the next 60 years.  Her table always had room for more even when you dropped in unexpected.  Joanne was an outgoing and social person who was devoted to her family, her extended family and a wide group of friends.  Socializing was easy for Joanne and that often meant a puzzle, a game of cards and snowmobiling with family and friends.  She always remembered birthdays and her fun cards were well received by all.

Due to the present restriction on gatherings a private Family service was held. A link to watch Joanne’s service will be available in her notice on the funeral home web site at www.heritagefuneralhomes.ca on Saturday, November, 21, 2020.   Internment will take place in Greenfield Cemetery, Arthur.

Her illness was sudden and quick and she was extremely well looked after by the staff at Groves Hospital, Fergus. Thank you to all the doctors and nurses who contributed to her care.

If desired and in lieu of flowers, memorial contributions in Joanne’s memory may be made to ‎Arthur United Church (where Joanne was an active UCW member), the Canadian Cancer Society or Groves Hospital which may be arranged through the Crawford Funeral Chapel.