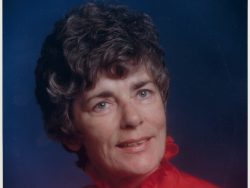 formerly of Kincardine, Seaforth, Toronto and Palmerston, passed away peacefully at Wellington Terrace, Fergus on Tuesday, December 29th, 2020 in her 85th year.

Special friend to Kate Kincaid and Bob (The Butler) and Denise Jameson of Kincardine.

Ellie’s working years kept her in Toronto until she and Peter retired to Seaforth then on to Kincardine.  Along with Family, The United Church, Eastern Star and Daughters of Nile were an important part of Aunt Ellie’s life.  Our Family wishes to thank the Staffs at Malcolm Place in Kincardine and Wellington Terrace in Fergus for their care and compassion.

A private service is being held Saturday, January 2, 2021 at Heritage Funeral Home, Palmerston.  A link will be available below on Monday, January 4, 2020 for friends and extended family to view.

Near and dear to Aunt Ellie’s heart was her charity work – in her memory, please make a charitable donation of your choice.