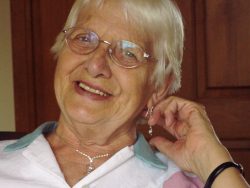 of Arthur went home to be with her Lord and Saviour surrounded by the love of her family on Thursday, February 18, 2021 in her 95th year.  Beloved wife of the late Jacob den Hartog who passed away 25 years ago on the same day as Elisabeth (1996).  Cherished mother of Wim and Betty den Hartog of Arthur, Henk den Hartog of Arthur, Willeke and Luke Mulder of Arthur and Ineke and Arie van Dodewaard of Williamsburg.  Dear grandmother of Heather den Hartog, Heidi den Hartog, Derek den Hartog; Siica and Connor Smillie; Monique Mulder, Michelle Mulder and her fiancé Brant Gibson; Sarena van Dodewaard, Nadine van Dodewaard, Keane van Dodewaard and his fiancé Jenna-Lynn Goulet, Moriah van Dodewaard.   Great grandmother of Colt. Fondly remembered by her nieces, nephews and friends. Predeceased by her grandson Daniel in infancy.

The family would like to thank the staff at the Royal Terrace Nursing Home for the care and compassion that was shown, as well as a special thank you to Jeanette from the Bayshore Nursing group for the support that she provided.

There will be a private family service held in the Palmerston Christian Reformed Church at a later date and will be announced at that time.  As expressions of sympathy donations to World Renew would be appreciated by the family.