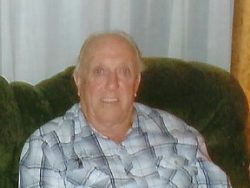 After a silent battle with cancer, it is with heavy hearts that we announce the passing of Ronald George De Long in his 83rd year.  October 15, 1938 – February 4, 2021

Dad left Glassville New Brunswick a young man and went to Kitchener, Ontario.  While ice skating he met my mom.  He worked hard at construction for Dunkers and XDG for many years.  Two of his bigger builds were the Beachwood dam in New Brunswick and B.F. Goodrich in Kitchener.  He loved country music, catching speckled trout from a brook down home, animals and snowmobiling.  But when it comes to my mind about my dad is how he kept his vehicles spotless.  He knew how to wash and wax a car.  To this day he has 1994 Ford Truck that looks like it just came off the assembly line.  Dad was particular, and when he became laid off from construction at the age of 54 he became the neighbourhood grass cutter and snow blower.  Everyone knew her would do an impeccable job.  He became high in demand doing most any job to perfection.  Then fixing small engines became his biggest pass time.  From all over people would leave mowers new and old in the driveway for him to fix.  When I visited I always had to see the newest project and get the details of the problems.  By the next visit I was called to the garage to hear it running and see the new paint job.  I don’t think there was ever a conversation the New Brunswick didn’t come up.  That was home and Dad I know your soul will be forever down east.  Thank you to all the friends that dropped treats off and gave words of encouragement .  To all of the Doctors, Nurses, PSW Workers, Chris the spiritual provider, Bill a neighbour and friend dad depended on and could count on.  Special thanks for being there all the times that we needed you in dad’s final weeks. Special thank you to Rosie the cat dad’s newest companion and best medicine in his final weeks.

A private family service will be held in the Crawford Funeral Chapel, Arthur, on Wednesday, February 10, 2021.  Ronald’s service will be video taped and a link will be provided below on Friday February 12, 2021 at 9:00 a.m.