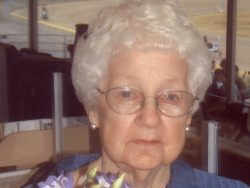 Jean will be missed by all the extended Stewart and Lawrence families.

Jean was a proud lifetime member of the Fergus Women’s Institute.

A private family service will be held in the Funeral Home Chapel on March 5, 2021.

A celebration of life will be held later when we can gather safely.

In lieu of flowers, donations to the Arthur United Church or a charity of your choice would be appreciated.