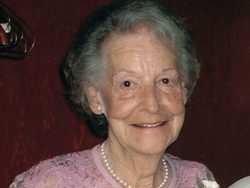 formerly of Drayton, passed away peacefully at the Fordwich Village Nursing Home on Monday,  November 8, in her 94th year. Beloved wife of the late Harold “Tex” Goodwin (2011). Loved mother of Sandra and her husband Don Fosbury of Kemble, Susan and her husband Phillip Moore of Drayton, David Goodwin and his wife Bonnie of Norwood and Dan Goodwin of Palmerston. Loving grandmother and great grandmother of Sean Fosbury and Tracey Brown and Riley, Shannon Woodworth and Dwayne Cofone and Evan, Stephen Moore, Scott and Amanda Moore, Zach, Josh and Zoey, Jason and April Moore, Meagan, Averie, Mylie and Lanie, Jeremy and Karen Moore and Tyson, Crystal and Gord Raynard, Allison, Elizabeth and Lucas John Rothernal and Evan. Fondly remembered by her nieces, nephews and friends.

A Private Family Funeral Service will be held in in Drayton Cemetery.

As expressions of sympathy donations to Palmerston and District Hospital would be appreciated by the family and may be made through Heritage Funeral Home, Drayton Chapel 519-638-3072