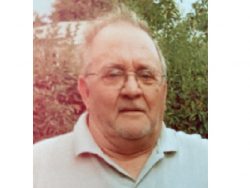 of Perth Township passed away suddenly on Thursday, February 10, 2022 in his 77th year.

Brent was an accomplished and respected trainer/driver of Standardbred Racehorses. Starting his early career in Saskatchewan, Alberta and B.C then moving onto California and Arizona before heading to Ontario in 1966 where he quickly made a name for himself on the Ontario Jockey Club Circuit as a much sought after catch driver.

Some of his most memorable horses were Maple Lane Strike, Garma Hooligan, Arnies Suwannee and Champ Tass. Winner of numerous driving titles over his years including the title of Slowest Mile on record at a whopping 2:08.3 with Columbia Brooks at The Meadowlands. His successful career included 1922 driving wins and more than 5.8 million in purse earnings.
After retiring from racing Brent became an ORC judge.

As expressions of sympathy donations can be made to the Ontario Standardbred Adoption Society or Harness Horse Youth Foundation.

“In Life, we loved you dearly, in death we love you still. In our hearts you hold a place, no one else will ever fill”