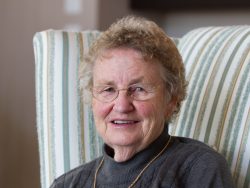 of Palmerston passed away peacefully into the presence of her Lord at Derbecker’s Heritage House, St. Jacobs on Monday, April 11th, 2022 in her 88th year. Beloved wife of Evert (Ed) Dyksterhuis for 66 years. Loving mother of Rita and Jamie Stevens of Waterloo, Doug and Kim Dyksterhuis of Drayton, Joanne and Dale Martin of Elmira and John Dyksterhuis and Renee Mc Isaac of Conestogo. Cherished grandmother and great-grandmother of Amanda and Jonas, Kaia and Malia; Melisa and Josh, Sadie and Mikaela; Bryan and Melissa, Summer, Harry and Finnley; Matt and Sarah; Brittany and Scott, Sophie, Emily and Chloe; Laci and Matt, Savi; Abby. Sister of Hennie and Walter Tinholt and Hendrina Lowe. Sister-in-law of Els Dyksterhuis, Henry Dyksterhuis, Peter and Irene Dyksterhuis, Christine and Peter Oosterveld, Debi and Larry Forhan. Fondly remembered by her nieces, nephews, cousins and friends. Predeceased by her parents Johan and Hendrina (Reuvekamp) Logtenberg, father-in-law and mother-in-law Douwke and Trijntje (Vos) Dyksterhuis, brothers Henk, John and Ralph, brothers-in-law Douglas Lowe and Jakob Dyksterhuis and sister-inlaw Eileen Dyksterhuis.

The family would like to sincerely thank the staff at Derbecker’s Heritage House for the support and care they provided.

A private family service will be held at Heritage Funeral Home, Palmerston on Thursday, April 14th, 2022 with Pastor Nick Pavel of Knox Presbyterian Church officiating, followed by interment in Harriston Cemetery. In Annie’s memory and as expressions of sympathy, donations to the Palmerston Hospital Foundation or the Parkinson’s Foundation would be greatly appreciated by the family. Arrangements entrusted to Heritage Funeral Home, Palmerston.

For God so loved the world that he gave his only son, that whoever believes in him shall not perish but have eternal life. John 3:16