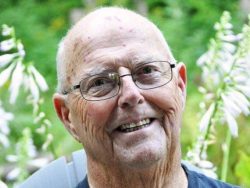 To say that we are lost without him doesn’t do it justice. Tom McFarlane passed away in the wee hours of September 20th, 2022 after a very recent diagnosis of cancer leading to a very steep decline in his health. Incomparable husband and father and proudest Poppa, he closed out the night at home listening to AM radio with his wife by his side just as he preferred to do every night that came before. He was the best friend anyone could ever ask for, and while we’re all missing his uncanny gift for putting people at ease we are doing our best to follow his lead by keeping spirits bright and taking good care of each other.

Tom was the beloved husband of Diane (Widmeyer) for 43 years.  Loving father of Kristen and Ehren Wagner of Brampton and Sean and Elizabeth McFarlane of Elmira.  Cherished grandfather of Grant, Claire and Jack. Brother-in-law of Miriam Long, Linda and Daniel Jarvis, Randy and Shelley Widmeyer, Mark and Julie Widmeyer, Linda Osborne and Bev Widmeyer. Fondly remembered by his many nieces, nephews and friends. Predeceased by his parents Jack and Mary McFarlane, brother Terry McFarlane, sisters-in-law Joan McFarlane, Elma McFarlane and brothers-in-law Paul and Dale Widmeyer.

The family looks forward to celebrating him and his legacy on October 14th, 2022 from 6:00 to 9:00 pm at the Frank Lambier Royal Canadian Legion Branch 409, Palmerston and we hope you might join us for a cold drink, a couple of tears, and many laughs.

As expressions of sympathy donations to SickKids Foundation, Terry Fox Foundation or the Palmerston and District Hospital Foundation would be appreciated by the family.