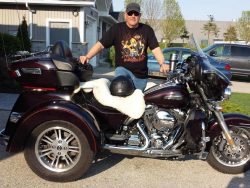 of Palmerston and formerly of Guelph passed away peacefully surrounded by the love of his family at the Palmerston and District Hospital on Wednesday, September 14, 2022 in his 72nd year.  Beloved husband and best friend of Carol (Arthurs) for 51 years.  Dear father of Lisa Laing and Al Girard of Sudbury and Paula Laing of Palmerston.  Loving grandfather of Ashley Lang and Joshua Lang. Brother of Rene Forbes and Shirley and Don Davis.  Brother in law of Judy, Diane, Betsy, Patsy, Sam and spouses. Fondly remembered by many nieces, nephews and friends.  Predeceased by his parents May Adams-Laing and Fred Laing, sister Marie, brother-in-law Paul Forbes, and Steve Arthurs.

Through the years Bill enjoyed playing golf and spending time with family and friends with his proudest moments becoming a grandfather. Most recently he found a love for riding his Harley Davidson trike. Many memories were made driving down countless roads with his co-pilot/navigator of 51 years.

Bill was a very social guy, outspoken and never held back on telling it like it was. He had a great sense of humour and was an honest and straightforward man who will be greatly missed.

To honour Bill’s wishes cremation has taken place. A celebration of life will be held at a later date and will be announced at that time.

In lieu of flowers, please send donations to the Palmerston and District Hospital or to a charity of your choice.