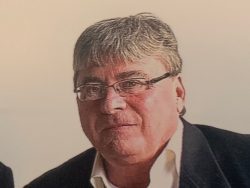 of Arthur went home to be with the Lord and reunited with his parents Murrell and Joyce Kelley and sister Kim Hald.  Wayne passed away peacefully at his home surrounded by the love of his family on  Wednesday, January 11, 2023 in his 60th year.   Cherished brother of Bonnie Kidnie and her husband Paul of Arthur and Penny Dyce of Fergus. Loving uncle of Trevor Hald and Zoe Hodgson, Tonya Hald and Kaitlin Hald, Bryan and Amanda Kidnie, Blaine and Michelle Kidnie, Kierra and Dan Bossenberry, Danielle and Scott Jones, Doug Dyce and Sarah Conners.  Loving great uncle of Oskar Hald, Emelia and Cole Kidnie, Chase and Blake Jones, Brixton, Crewz, Cove and Rue Dyce.

At an early age, Wayne developed a great love of cars. His passion was the Chevy. His knowledge of cars, motors and mechanics was a natural gift. Over the years he owned and restored a number of vehicles which included a 68 Chev Camaro, 76 Corvette Stingray but by far his favourite was the 37 Chevy Coupe.  Over the years, he changed out the motor and interior twice and the paint colour three times to get to his liking.  Later on, he expanded his interest and began collecting silver, coins, watches and stamps. So many more precious memories that we will carry with us forever and a day.

As the inscription you put on the spoiler of your Camaro, we hope you “Take it to the limit” in heaven. XOXO

As per Wayne’s wishes a private family service held in the Crawford Funeral Chapel, Arthur.  Spring interment in Greenfield Cemetery.  As expression of sympathy donations to the Salvation Army are greatly appreciated by the family.